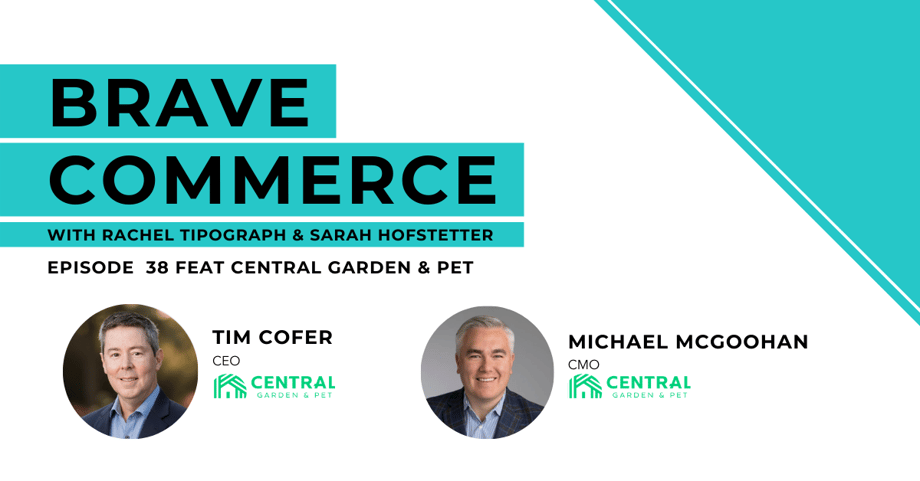 Last year, record pet adoptions and home improvement projects took place as everyone “cocooned at home”. Brands that served this need had the fortunate challenge of rapidly scaling their supply chain to meet their consumers’ demands, and to be where they wanted to shop.On this episode of BRAVE COMMERCE, hosts Rachel Tipograph (Founder & CEO of MikMak) and Sarah Hofstetter (President of Profitero) sit down with Tim Cofer & Mike McGoohan, Central Garden and Pet's CEO and CMO. Together, they discuss how they met this surge in demand, built eCommerce capabilities for the future, and took risks in their personal and professional life.

With “massive channel shifting” and “significant growth online”, the pet category “grew fivefold in eCommerce in the past five years”. Within this industry, the biggest challenge Central Garden and Pets faced was keeping up the inventory with the surge in demand. The pet category crossed 20 percent of total eCommerce sales this past year. The industry had “strong channel dynamics” that the team had to work through. Many pure play platforms, such as Amazon and Chewy, were already significant players that had well developed platforms on which eCommerce behavior had been adopted. The team had to prioritized and balanced inventory between pure play (online only) and brick and mortar (through omnichannel).

Despite the similar surge in demand for pets and gardening, the two categories had very different challenges. The garden business, relative to pets, is “rather underdeveloped”. One of the key areas of concern for gardening was eCommerce profitability. Fortunately, the gardening industry has “more of a regional supply chain” such that the “sources are closer to the end user”. Pricing goods can be complicated too, as the team found that consumers do not enter into the shopping journey with a good idea of what price to expect. The team has been spending time identifying “evidence around the ability to price” and using that as a key growth driver.

For the duo, the current focus is on building capability with their employees and upskilling them on eCommerce. Fortunately, the company had already begun investing in eCommerce in the years prior. The complexity lies in balancing “building capability at the same time that you're trying to absorb demand,” Mike notes. Central Garden and Pet was founded in 1980 as a distributor with a traditional brick and mortar route to market, so a cultural upheaval needed to take place within the company to build the foundations fit for the digital age. Tim concludes that they wanted to “future-proof this company and build a digital-first mindset, and that goes beyond eCommerce.”

Being brave by taking risks in life

For Tim and Mike, bravery means taking risks in their personal and professional life. For Mike, one brave moment in his professional life was entirely pivoting the brand Biofreeze. The brand targeted 55 to 65 year olds when he started with the company, and was mostly B2B. Mike decided to shift Biofreeze’s messaging to be about product performance, and targeted active 24-44 year olds instead. “I'm a big believer,” he says, “that if you can set out a really bold vision, you can rally a group of people behind that.”

For Tim, the risk he took in his career was in the number of places it took him to. From Walnut Creek to London to Singapore and everywhere in between, Tim has lived and worked in six states and six countries around the world. “You leave the comfort of the nest,” he explains. ”You leave your friends, your family, the people you work with. You get thrown into completely different cultures, situations, businesses, different contexts.” However, these were important career leaps. “It's what makes life great,” he reflects, “and it's certainly shaped me to be a more inclusive, cross-cultural type of leader.”

When it comes to personal acts of bravery, Tim tells the story of ski paragliding in the Alps. “I [said] a prayer to the good Lord above with my wife and kids in mind,” he recounts. “But I went off the top of that thing and it was the most glorious 30 minute tour in the air of the gorgeous Alpine scenery of Austria. For Mike, he points to his first time eating a live scorpion in a Chinese night market. “It was a little crunchy,” he remembers.