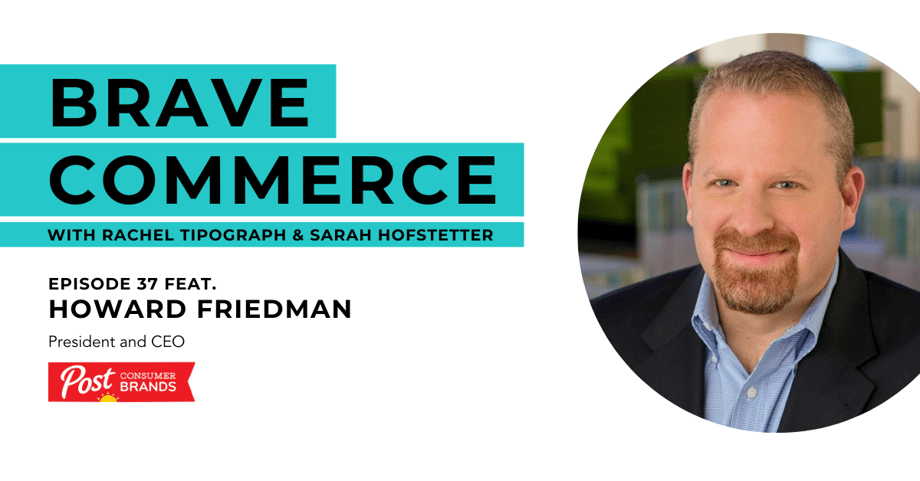 When the pandemic changed consumer behaviors last year, Post Consumer Brands were doing very little business online — eCommerce budgets were siloed and dictated by individual brand managers. So how did Post quickly adjust people, systems, and budgets to catch up with eCommerce?

On this episode of BRAVE COMMERCE, hosts Rachel Tipograph (Founder & CEO of MikMak) and Sarah Hofstetter (President of Profitero) sat down with Howard Friedman, Post Consumer Brands’ President and CEO. Together, they discussed why he encouraged employees to make original mistakes, the importance of a clear change agenda, and how he learned how to overcome fear.

Building eCommerce by moving away from perfectionism

Howard knew that to quickly build an eCommerce foundation, his team would need to be courageous and take risks. To catch up and quickly establish Post’s eGrocery presence, he encouraged his team to abandon their fear of mistakes, as long as the mistakes were original. “My view of it was, the worst thing that was going to happen was we were going to waste a couple of million dollars. The first month we would do it and say, ‘Wow, that was really bad.’ The second month we'd come back and do it again with a correction of error and go, ‘Wow, that was also really bad,’ and then we would then start to make corrections of errors.”

Howard also emphasized the importance of accepting directional correctness. “I want to be 80 percent right 100 percent of the time,” he shares, “and not 100 percent right ever.” While they made mistakes, “the simple act of doing means suddenly mistakes are benchmarked against the last mistake you made, as opposed to what you had hoped would happen.” By shifting his team’s mindset away from perfectionism and towards action, Howard got his Post’s eCommerce up to speed. “It was an [longer term] existential threat if we didn't get in [on eCommerce],” he notes. “The algorithm will forget you.”

Transitioning teams with vision and clarity

To Howard, a “well informed team that understands what the goal is and what needs to be done” is more effective than “a team that is given explicit directions,” and he applied this when determining and communicating the changes Post needed. Rather than setting forth goals from the top down, he incorporated his employees’ ideas. At the start of the pandemic, he accumulated feedback from throughout the company for areas of improvement, which he then translated into a change agenda that was then communicated to the company.

Howard also understood that change was not a one-and-done task. He believed that “if the pain of staying the same exceeds the pain of change, people will change. They just need to know what change looks like.” To help his team visualize change and the impact it would bring, Howard highlighted internal key performance indicators and how employee goals and incentives were cascaded throughout it. Then, for example, they could see that “by doing three test-and-learns or building out a capability, [a measurable result] gets done.”

While Howard doesn’t consider himself particularly brave, he points to joining the wrestling team in high school as his bravest moment. As the youngest child from a “protective family”, he had no idea what to expect from this three year commitment. Not only did his mother disapprove of this choice, he was also afraid of getting hurt. But by committing himself to the team, he learned about his own physical resilience. “It became the foundation of a lot of things I learned how to do,” Howard notes. “I suddenly learned that when I got hit, I wasn't in soul crushing pain. I didn't have to go to the ER, I was going to be fine. And I learned how to compete a little bit more physically than I had ever done before.” This grew his appetite for competition and pushing boundaries, gave him the opportunity to join the military, and become “far less afraid of facing anything”.