A Play by Play eCommerce Retrospective on the 2021 Super Bowl 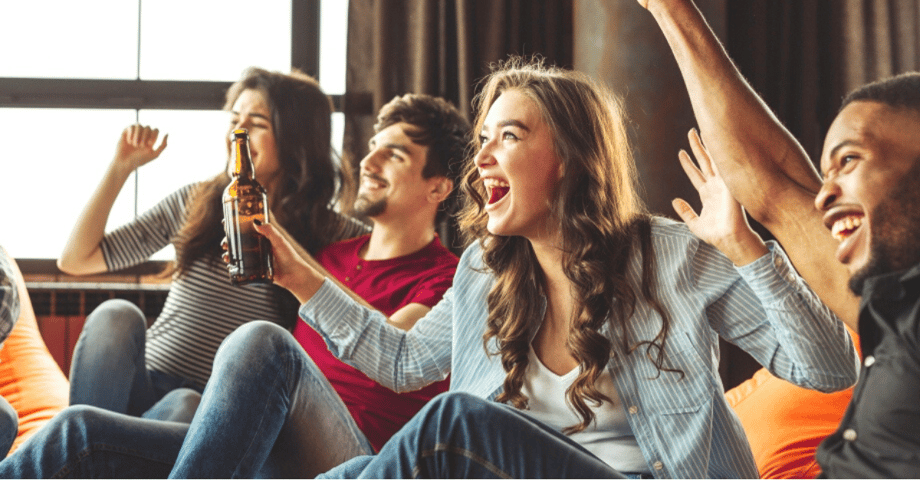 Super Bowl LV has come to a close, marking the first time this peak advertising season took place in a socially distant format. While brands like PepsiCo and Kimberly-Clark continue to purchase the 30-second ads at a multi-million dollar price point, many other brands also took advantage of this event to level up their eCommerce campaigns.

Here is our retrospective on what kinds of campaigns they ran, which strategies were the most successful, and what learnings we took away on consumer behavior and event driven eCommerce marketing.


Brands needed to be present at every stage of the funnel

MikMak’s eCommerce data tracking performance during Super Bowl week shows that consumers were ready to shop. Across industries, from traffic volume to purchase intent, all shopping indicators point toward a growing readiness to buy in the days counting down to Super Bowl Sunday. Between Wednesday and Sunday, overall eCommerce traffic grew 20% while purchase intent grew 18%, reaching its peak on Sunday night. 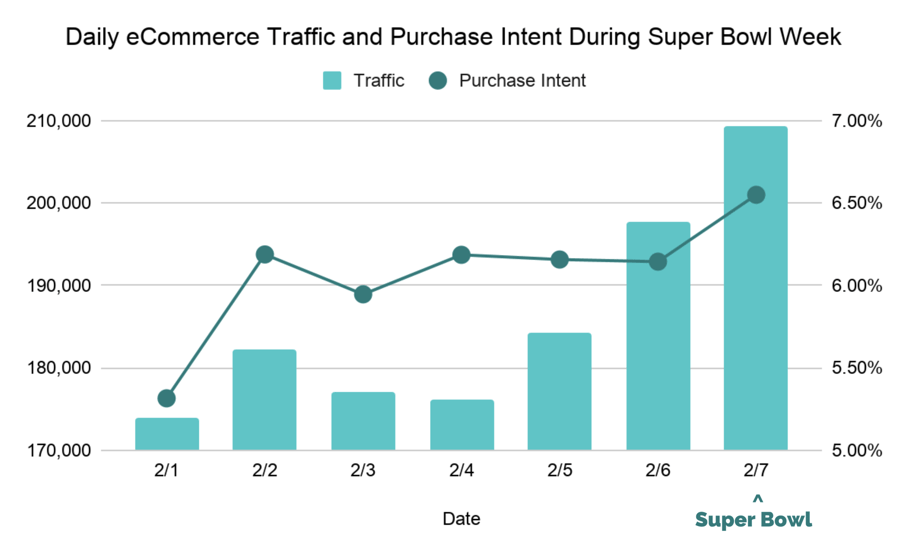 What’s more, 2021’s Super Bowl week was one where being present at every stage of the marketing funnel mattered. Brands flighted media across channels. However, over half of all eCommerce traffic during that week was driven by Facebook/Instagram, Snap, and programmatic advertising. While consumers overwhelmingly engaged with upper funnel media, which drove 82% of overall traffic, it was lower funnel media that drove conversion, outperforming upper funnel purchase intent by nearly four times. Given consumers’ high engagement with awareness based content and their willingness to convert via decision stage media, it was the brands that flighted media targeted at all levels of purchase consideration that got the most of this online shopping occasion.

Shopping habits developed in 2020 for online grocery are still here

Given the social nature of this annual sporting event, it is unsurprising that the top players for Super Bowl eCommerce were food, beverage, and alcohol brands. This Super Bowl week, purchase intent for grocery brands outperformed its historical benchmark by 30%. Saturday, rather than Sunday, was the peak day for consumers making purchases, likely as households finished making preparations for game day. Consistent with consumer behavior throughout 2020, the shoppability of eCommerce campaigns stayed with top of funnel content. Consumers were ready to buy, they wanted it now, and brands that catered to this urgency with media presence and product availability likely reaped the benefits.

Where did these online grocery shoppers for the Super Bowl begin their shopping journey? Where did they check out? Our data shows that there were 5 major channels that drove nearly 75% of all eCommerce traffic, and 4 major retailers at which they checked out. Facebook/Instagram, Snap, YouTube, Verizon Media, and programmatic advertising were major eGrocery channel players for this year’s Super Bowl. Instacart, Target, Walmart, and Amazon were where shoppers chose to check out. This is consistent with previous consumer behavior observed for grocery eCommerce, where sales tend to be from a few major retailers. 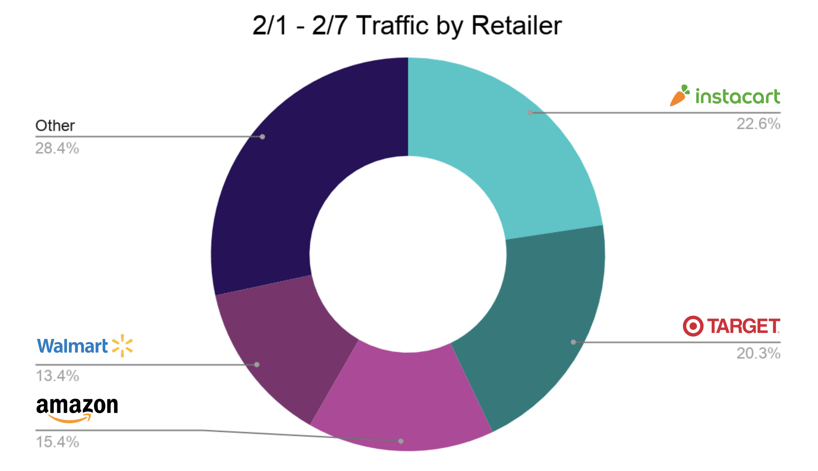 Most shoppers bought their alcohol for the Super Bowl on Tuesday

For 2021 Super Bowl week, alcohol shoppers were ready to buy -- and they were ready to buy now. Both upper and lower funnel media drove purchase intent at double digits, with lower funnel media bringing in an impressive 92% of all traffic. Even without occasions, purchase intent for this industry is historically high (with alcohol purchase intent up to five times higher than that of grocery over all). This is likely because when shoppers are looking to buy alcohol, they’re also looking to consume. When you want a drink now, it’s the availability and delivery time that matters.

By Sunday, there were 67% more alcohol shoppers online than on Monday. However, it was Tuesday, February 2nd, that saw the highest purchase intent all week. At 24%, this meant that nearly one out of every four visitors that viewed an online alcohol ad that day proceeded to cart. We’ve often said that the best timing to launch a campaign for a sporting event is up to a week before game day, and this continues to hold true for this year’s Super Bowl week. Alcohol brands that adjusted their media and inventory to accommodate this shopping behavior were likely the most successful.

Did these numbers match your predictions? Did your brand place your media and inventory bets successfully? What would you have done differently had you known these shopping trends earlier? Make sure you’re subscribed to our newsletter to stay at the forefront of consumer shopping trends.